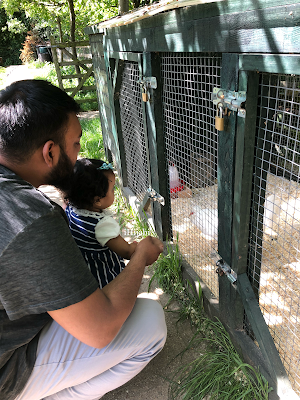 Growing up, my dad was strict. He never showed a vulnerable side and as with most South Asian dad's, found it difficult to show affection. In fact, when I think back on it I don't remember him showering us with hugs and kisses or telling us he loves us or is proud of us. When I wanted to go somewhere or do something my mum would say 'go ask your dad' and I never would because I was too scared.

Then in 2010 he was diagnosed with cancer and our world came crashing down. I was at uni at the time and it was the first time I saw my dad broken and vulnerable. I remember the ride home from the hospital after they gave us the news and my dad telling me I needed to be the 'man of the house' and he thinks of me as a son because I'm the eldest (my brothers were just 8 and 1 at the time). It's the first time I felt his words as his love for us, the first time I felt like my dad wasn't just interested in what grades  got at school but also deeply loved us and cared for us and worried about our future and how we might have to survive without him.  Alhamdulillah he is in remission but still not the same as he was before he got ill.

That time in our lives was hard but in hindsight made us stronger as a family. He relied on me more and to this day after I'm married and busy with my own little one, he still gets comfort from me coming to his appointments with him, doing applications for him or even just discussing his health issues with him. Probably more than not because I studied in the medical and healthcare field and I understand this area a bit more than anyone else in my family but also because I've grown up and he doesn't feel the need to protect me from everything now.

I felt my dad's love in other ways like when he had no expense spared at my wedding or bought me 2 outfits every Eid just because I liked it, bringing home chicken tikka because I've come to stay. I very rarely hug my dad and when I do it feels awkward because we never showed our emotions like that growing up. I never felt like I missed out until I saw the way my husband is with our daughter.

He is such a doting dad, he gets excited about every little thing she does, he wants to take her out to experience things whether thats going to the farm and seeing some animals or having daddy daughter days where he takes her out for a few hours to the park or for some ice cream while I'm out with friends or having a much deserved pamper day.

I love my dad and I know he loves me and I don't know if not getting physical love and affection or being told it with words has made me a slightly cold person where I also find it awkward to show affection. I generally don't greet people with hugs and kisses unless they're my cousins and close family. I'm also not big on using words out loud to express my emotions.

I suppose now that I think back it has had an effect on how I show my affection and I think it's high time we changed the cultural rules on how a father and daughter should be, on how men should show or hide their emotions. I for one wouldn't want my daughter all grown up and not remembering ever been shown love and affection by her dad and I know my husband being the man he is and how he wears his heart on his sleeve she will never feel like that InshaAllah.

I know there will come a day where I will regret not hugging my parents enough, not telling them I love them enough. I pray that my husband and I don't take on this typical asian parenting style as our daughter grows up, I hope that we can nurture her feelings, show her we love her and allow her to express her feelings to us without it being awkward.

June 17, 2011
Assalaamu alaikum! Sorry for going AWOL for a while there, my netbook was down so I couldn't write blog posts and post pictures )= Alhamdulillah it's working now, a BIG JazkaAllah khair to the computer fixer upper. Anyway today I have a review for an amazing hijab company in the states! =D I received 3 scarves from them yesterday, a thin scarf, a crinkle scarf and a diamante jersey scarf, they're all super cool but first I'd like to tell you a little more about the company itself. Unique Hijabs actually started on ebay and then launched it's own website in 2009 their website is: www.uniquehijabs.com They sell a huge variety of hijabs and accessories such as under scarves, sleeves and brooches. One of the things I liked about this company is something that they've written on their facebook page, which I can actually relate to as I'm sure you can too: Food for thought and Unique Hijab Facts, to help you make your next purchasing decision wisely.
Read more»

May 11, 2018
I finally got around to writing up this much requested post on the products I bought from FWBeauty, the reason I haven't written something sooner is because I believe it's important to be using a skincare product for a while before reviewing it, as most skincare products don't give significant results after just one or two uses. I've been following the founders of FW Beauty Fatiha and Yasmine's journey online for a while now and I love seeing how successful they are becoming. They talk about their products with so much passion and confidence that I had to meet them in person and try out their skincare products. If you've been following me on Instagram you'll know that I attended the Muslim Lifestyle Show a few weeks ago and picked up the FW Beauty skincare products that I've been dying to try ever since I saw the glowing reviews. They had everything at a reduced price and I picked up the clear complexion bar, the gold elixir brightening facial
Read more»