Dear Diary, What's Wrong With Me? 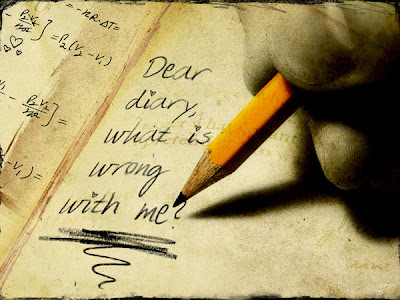 I've got a tonne of posts I've been intending to write for a really long time but for some reason I feel really lazy and can't bring myself to just get on with it.

You might be wondering why I've been really quiet on here and on my facebook page and the honest truth is I've been feeling like rubbish for a while now and I don't even know why. I feel un-enthusiastic about life in general and my mind and body just feels like it can't be bothered to do anything, thinking about it makes me feel really frustrated too. When I feel like this I just end up online shopping and eating junk.

I don't know if it's the post Ramadan blues or what but I just feel frustrated and lazy and uurrrggghghghgh for no reason what so ever to the point where I feel sick!

I don't know if it's normal or not but I feel like I haven't cried for ages and just need to scream and cry to vent all the frustration, it's weird and scary because I know that the slightest thing is going to set me off and I'll just snap at someone or be really cranky and regret it later.

It's not normal but when I was in my teens I used to feel this way a lot. In fact I went through some difficult times during my teenage years that I haven't really spoken about because it's so gloomy and I don't want people to think I'm a freak (I probably was) or judge me because I'm not like that now. I don't speak about it because I feel I had no right to feel depressed, I wasn't poor or in an abusive relationship or neglected by my parents or in a war torn country, I hadn't been through a major trauma or been really under pressure after having a baby or something, so I think most of the time it was just me being stupid and spoilt and irrational.

It might have just been a phase that I was going through where the whispers of Shaytaan effected me more as I was more vulnerable due to lack of imaan. I was always really moody and angry which I guess is normal for a teen but sometimes those feelings of intense anger turned into (minor) self harm like sitting in the bathroom trying to etch my initials into my forearm with a compass to release that emotional pain physically. When it would boil over, I often wanted to pack my bags and run away, at it's very worst I felt suicidal to the point where I wished I didn't exist. Bearing in mind I was not practising at the time, nor did I have any good Islamic influences (people that I could relate to) around me but even with all of that something kept me going, kept my feet on the ground and held me back from making a huge mistake.

Quite often I'd want to just sit in the dark on my own away from everyone, I'd immerse myself in books and music to get away from the feelings of unexplainable rage, music probably made it worse (emo/rock/punk music is really no good at cheering you up). And it really was unexplainable, like my parents being (overly) strict and not letting me go out with friends (something really minor) would set me off and bring about all the feelings of anger, rather than being able to speak about it I would lock myself away at the mercy of my own depressing thoughts. One of the main reasons why I didn't speak about it is because there was nobody to listen, the friends I had would not understand me and well speaking to my parents was out of the question (Asian people know what I'm talking about, unless it's to do with school work you don't really speak to your parents, especially about 'feelings'). Bottling these feelings up really didn't help, in fact it made things worse because it just kept building up until I felt the only ways to release it was in the ways I described above.

It's weird because when people meet me or talk to me or whatever, they would never in a million years know that I was feeling depressed or down, even when I was younger because I've always been very good at appearing happy and 'normal'. Even now if someone at work makes me really upset or really mad I don't show it, even if I really hate someone they'd never know. Many people have commented on it by saying things like I'd be good at poker because I have a very good poker face, or things like I look like I have no facial expressions or ask why I don't look really excited when I get good news like my straight A's at GCSE, I don't know why I'm like that but I just really can't let my emotions show, I don't know how to, it doesn't just come naturally.

So how did I get from writing about not posting much on the blog to sharing a glimpse of my gloomy teenage years and my poker face? Well it's because sometimes, (like now), I'm scared that those feelings and thoughts will come back, I mean yes, I managed to get through all of that, found good companions and through them I found Allah, but when I feel low in imaan like I do now (frustrated and lazy for no reason) I'm afraid that I will once again go back to that depressing stage.

I know this is nothing in the grand scheme of things, compared to everything going on in Syria, Egypt and the poverty in parts of Africa and Asia this really is minor so I guess I 'm just being a bit of a drama queen  and an emotional, hormonal wreck at the moment and I will get over it, by the will of Allah I always do get over it, but I request all of you reading this to keep me in your du'as (as well as my figure and bank balance). And if you've ever felt this way, to know that you're not alone, you're not a freak, you will get through it, because I did (sort of) and that was through good friends and Allah.

Sorry for this depressing post on a Sunday afternoon, I really just needed to get it all out in the hope that writing it out will help me get over it. I promise my next ones will be a bit more uplifting and I will share some outfit of the day posts as well as some reviews for Zama Designs and Islamic children's books inshaAllah.

....In the meantime think positive...that's what I'm going to force myself to do.

Testing out my new camera

You may or may not know I got a Canon 600D DSLR camera a few months ago (mentioned it in an earlier post) and since then, being the keen shutterbug that I am, I've been snapping pictures of anything and everything. I am by no means a professional photographer, never studied photography or any art related subject (I'm a radiographer by profession so my background is all sciency) but I still love the arts and photography has always been something that I was really interested in.

I did photography as part of an enrichment/extra curricular activity thing during college and that too just because one of my friends wanted to do it and we thought it'd be fun, so from that I learnt the basics of using photoshop. Anyway I've captured some cool and some random things since I bought the camera and wanted to share it with you guys =D


What did you think? InshaAllah I will share more so be prepared for more of this randomness from yours truly.
at August 02, 2013 1 comment: