Hope you are all in the best of health & imaan inshaAllah. 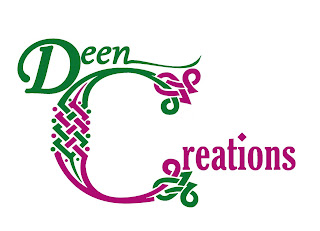 Are you looking for a hobbie? Cross stitching might be just what you need over the long summer days. I was recently sent a cross stitch kit from a company called Deen Creations who sell cross stitch kits for beginner and intermediate cross stitchers (if thats what they're called). To be honest I'm not actually that great at sewing but I would like to think I was artistic or creative because I Love painting! So I thought I would give this a go and let you guys know about it too.

The package came neatly packaged with all these bits and bobs that are required to get going with the design. I asked for an easy design because I had never done cross stitching before. 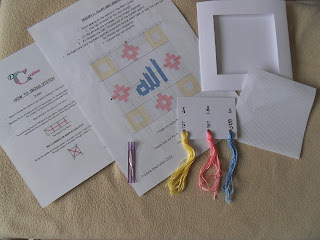 The kit included:
Everything was very well organised in the package down to the threads which were seperated into the colours on a piece of card.

Once finished the design can be glued onto the card and placed inside the envelope to give to someone as a gift which I thought was an amazing idea. Only minor thing I would say about the envelope is that it was folded when packaged so had a line down the middle, I personally would prefer the envelope to not be folded as it doesn't look nice when you want to give it to someone. 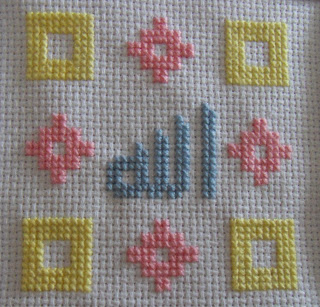 The instructions that came with the kit were not that easy to follow for me as someone who has never done any cross stitching, I did it wrong a couple of times and had to unstitch that part because I did it wrong. I realised that I quickly became inpatient and ended up leaving it, I couldn't finish the pattern because I became busy with organising the charity event and weddings we had to go to, so I think if I was doing it as a pass time during the summer when I wasn't busy then I probably would have been able to finish it. I would recommend clearer instructions and maybe actual photograph step by step rather than diagrams, I would also suggest maybe having video's on youtube or something so that people can watch how it's supposed to be done, I think that would have been most useful to someone like me.

At the moment Deen Creations has 5 different patterns and will be updating their collection with more patterns in the future inshaAllah. These would make perfect gifts for Eid, weddings and other special occasions, it shows that you have really put effort into the idea, the kit itself would also make a great gift for someone creative and wants to try something a little different. Once you have got the hang of the designs by Deen Creations you could even start making bigger and more complex pieces to decorate your home. 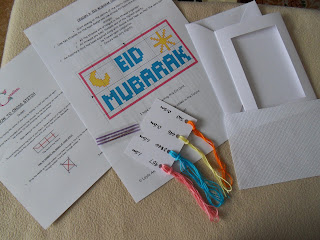 The customer service at Deen Creations is out of this world mashaAllah! It was a pleasure dealing with the sister and I would highly recommend this company to anyone looking for a hobby to someone looking for a unique gift.

Check out the Deen Creations FB page https://www.facebook.com/DeenCreations and check out their other designs.