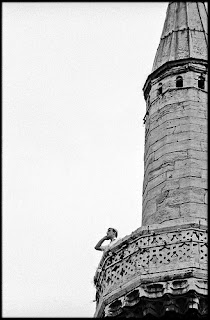 My father along with with many people in the local area and from afar attended his janazah today.

The story goes...the Muezzin never missed a day to open the masjid at Fajr and give the adhaan. A pious, kind hearted man who never had a quarrel or conflict with another person. Today my father came home with stories about him, felt like I was listening to a story about one of the sahaba's. I never met him, yet when I thought of him from what my father told me I couldn't help but feel teary, like someone I actually knew had passed away.

All the people at the masjid only had words of praise and compliment because of his character mashaAllah. The janazah was attended by soo many people they could not all fit in the mosque to pray for him.

Through the cold snap, rain, hail sleet and snow he never failed to make it to the masjid before everyone to give the call to prayer and make sure the prayer started on time, until two days ago. When people arrived at the masjid for Fajr and realised it was not open they were concerned, as for almost the last decade he had been on time. The worshippers contacted the family to ask where he was and his wife went to call him. As she called him she realised he had returned to Allah in his sleep. His last prayer...Isha at the mosque.

I never met this man but heard his melodious voice echoing the praises to Allah, his testimony of faith and his call to the people through the heart of North London many times, I never knew he was a friends father and never knew my family knew him too. He had touched so many peoples hearts that today people from all backgrounds turned up for his Janazah.

How many of us can really say we treat people with such love and kindness the way our beloved Prophet (s.a.w) taught us? How many enemies have you made? How many times have you prayed at the masjid that people are concerned for you when you don't turn up one day? How many people will turn up at your Janazah and pray for you? Return to Allah before it's too late.

May Allah bless this amazing man and grant him a spacious garden in Jannat-ul-Firdous. May He bestow peace and tranquillity in the hearts of his family and give them patience at such a difficult time.

Please keep him and his family in your du'as...A loving husband, father & pillar of the community who will be greatly missed....The Muezzin.