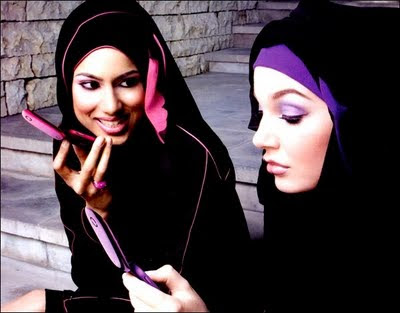 I've been getting a few requests to do a post on the manners of a Muslim woman outside the home, so here it is. I think one thing a lot of sisters forget is that hijab is not just a headscarf, hijab is the way you dress, but it's also the way you carry yourself, the way you speak and the way you conduct yourself in different situations.

There are so many things that I see Muslim girls do that really makes me cringe! Things like swearing, shouting and being rude or obnoxious in public. I was watching a video by sisters about coming out of the hijabi closet so to speak and the second sister in the video said something that I totally agree with. She said that once a woman steps out of her house in a hijab she is automatically an ambassador for Islam, the reputation of Islam depends on her whether she likes it or not. When you go out in hijab people know you are a Muslim because this is the one thing that makes us stand out from the kuffar. Your hijab gives indirect dawah to people around you, when someone sees a woman in hijab they assume that the way you are behaving in public is because of what Islam has taught you. You represent the Muslim women of today, don't let it be a contradiction of the way Allah tells us to behave...'modestly'.

Like I said above, women in hijab automatically represent Islam to the outside world so we should all be striving to give the best example of Muslims and muslim women in particular through our own actions. Things like helping an elderly person on to and off of the bus or giving up your seat for them shows that Muslim women are compassionate and kind. Going out of your way to help someone and even just a friendly smile at another woman or a young child is a gesture of kindness, common manners such as saying excuse me, please and thank you show that we are not part of some uncivilised culture but are polite and appreciative. not only will that present a positive picture of Muslim women, you will also receive reward from Allah for doing these good deeds inshaAllah.
at July 01, 2011