April 05, 2011
Today was the exhibition for the 'Artistic Jihad competition at St Martins Art  Design College in London. The competition was launched a couple of months ago and was open to all students (or graduates up to 3yrs) in the UK and Ireland. You had to send in a picture of your artwork (or the work itself), the art was to be different to the traditional Islamic Art, and different they were. SubhanAllah the pieces were AMAZING mashaAllah, congratulations to all the winners of the competition!

There was a brilliant talk by sister Sara Joseph editor of Emel magazine as well as a brother from FOSIS (Federation of Islamic societies) and the team leader of Artistic Jihad.

My friend and I made our way to the exhibition from Uni (which was quicker than we expected) so we got there early. We walked in and asked the security guard how to get to the exhibition and he asked for ID (it was open to the public -_- ) and when we explained that we're not students of St Martin’s he looked a bit confused but said he'd let us go through and explained (in a very looong roundabout way) how to get there, when he could have just said ' Follow the signs' . We figured he just wanted us to think he was doing us a favour and maybe he'll do that with everyone lol. We followed the signs, up some stairs and then down some stairs, through narrow corridors until we got to the exhibition, it felt like a little treasure hunt (= oh the suspense and anticipation of seeing some genius pieces of Islamic art (ok so it wasn't that dramatic especially because we were too early and they were still setting up =S )

Anyway, I took some pictures of the artwork on display (although the pictures are not great =S ) I will try to explain a bit about the art from what I can remember inshaAllah. To see the picture bigger click on it.

This first piece I looked at was indeed very intricate and beautifully made, but I didn’t really understand it, (I did think it looked a bit like something out of transformers) but it is supposed to be the infusion of technology and humanity in the modern world (or something along those lines) 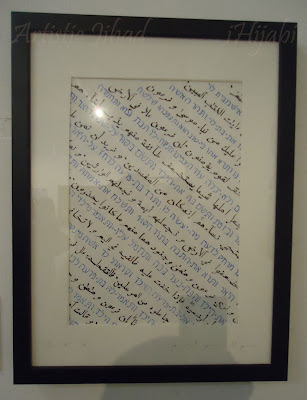 Next was this piece of Arabic & Hebrew scripture, it is talking about the life of Musa AS (Moses pbuh) and is to show the importance he has in the Quran and in the Bible. 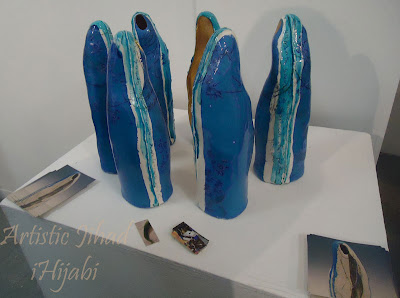 This artwork was made from ceramics (to be honest I didn’t read the description) but to me it looks like figurines of Afghan women (due to the traditional blue burqa’s worn by women in Afghanistan) I’m not sure how clearly you can see it but there are some beautiful floral patterns on the sculptures. I think I can get in touch with the artist that made this and if I do I’ll get an explanation of what this piece is supposed to be about inshaAllah. 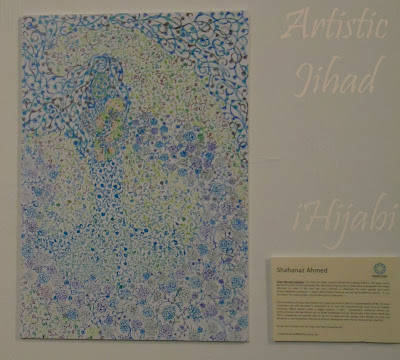 This next piece is made up of different sized floral patterns and is supposed to show a bigger picture when you look at it from far. I stared at this one for absolutely ages! And still couldn’t figure it out, but I heard a woman behind me say she can see a mother and baby...hmmm what do you think? 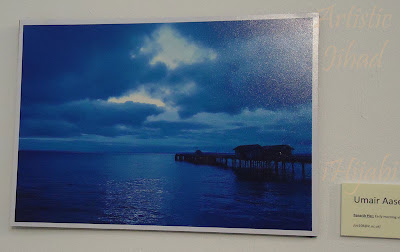 This photograph is of an early morning sky and pier in some part of the UK can’t really remember where it was, but SubhanAllah it’s beautiful, I just love the colour and how the sea looks like it goes on forever. 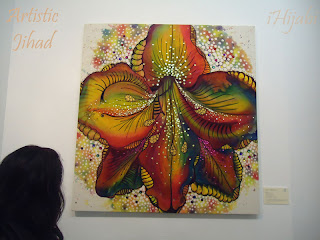 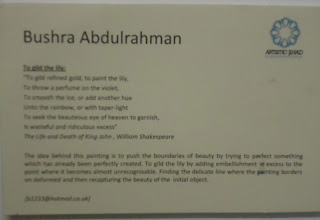 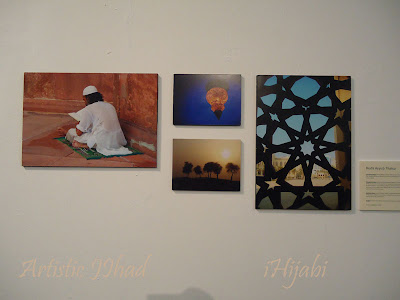 This set of 4 photographs speak 4 million words (= Islam and its art in your everyday life. 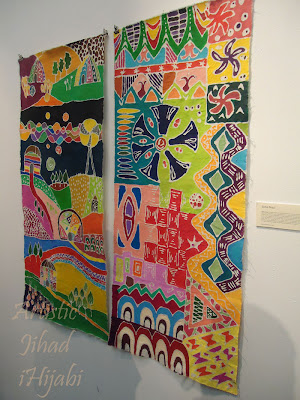 This is piece is batik on fabric; the vibrant colours do really stand out. It’s bright, bold and colourful, reminds me of the traditional clothing and head wrap worn by African women. 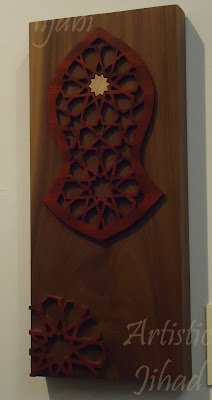 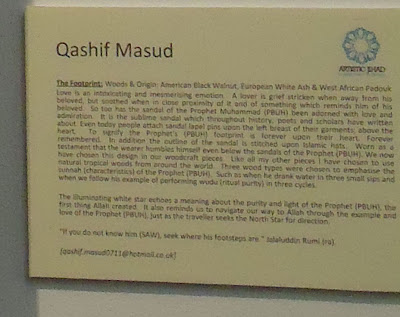 This next piece was carved out of natural wood. I’ve included the description for this one so that you can read how meaningful the art really is. 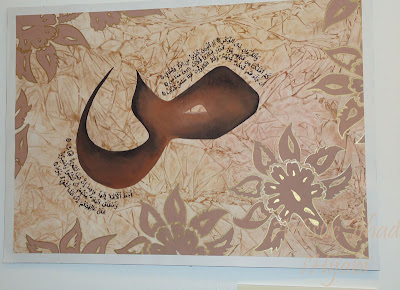 I can’t really remember what this one was about, but it does look brilliant mA. I love the texture created in the picture. I’m guessing it has some verses of the Quran written on it as well. 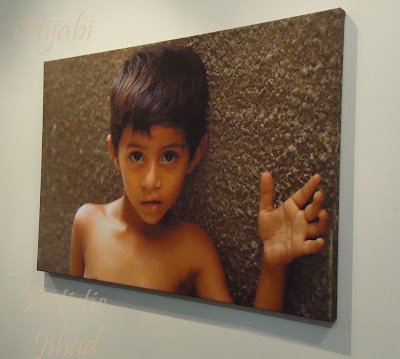 This is a photograph of a young boy in Lahore (Pakistan) the photographer explains that he was fiddling with his camera and so into taking pictures of everything around him, when he saw this young boy looking at him, this picture speaks a thousand words, his simplicity and innocence mA is just so beautiful. 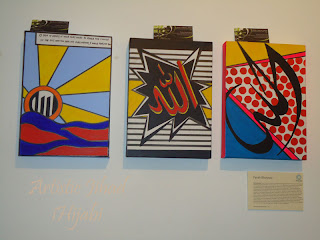 For all of you that know sister Farah form Farah Visual Arts (facebook page) will have seen this amazing trio. We’re so happy for you sis, you definitely deserved to be amongst the winners. Sister Farah explained her work in an interview iHijabi did a couple of weeks ago, to read that interview click here. 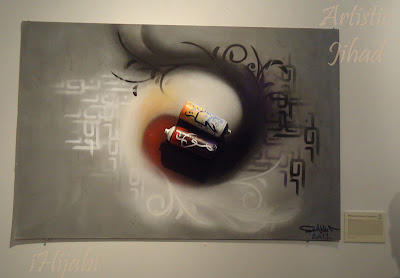 This is a spectacular piece made using spray cans. It is an image of yin yang with two aerosols in the centre with the words hayaat (life) and maut (death) written on the cans. Without one there cannot be the other, life cannot be without death just as death cannot come without life. 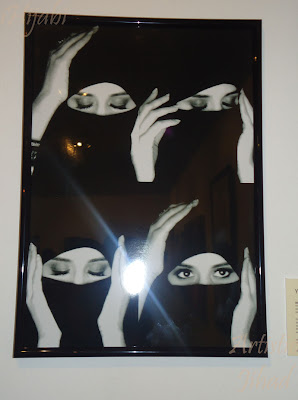 This set of photographs is to represent the issue of niqaab especially in the media and the negativity towards is. It represents the struggle women who wear it face. (Apologies for the flash). 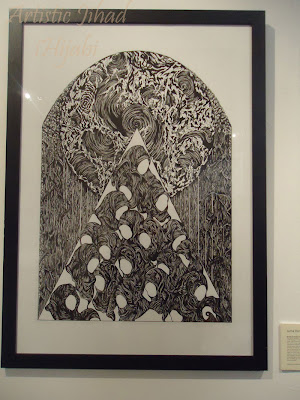 I don’t really know what this piece is about, (my friend seems to think it has an illuminatiness about it lol, I don’t know if I really believe all the illuminati stuff [maybe to some extent] but we both agreed it’d be scary to have that in a bedroom with images of all those heads with hair and no faces) I can tell it took ages, you have to look really closely to see how much effort went into this one. 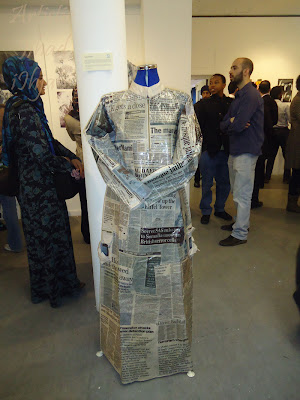 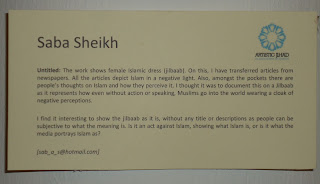 This is supposed to be a jilbab made out of newspapers to represent the negativity women who wear it face. I’ve included a description because it explains it quite well. 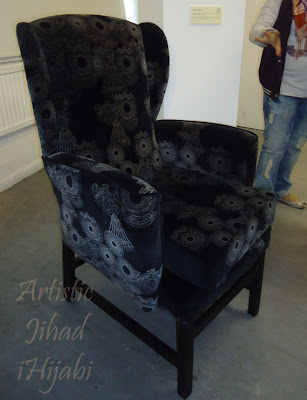 This is a chair. With Islamic patterns on it. ‘?’


So that's it, what did you think of all the art? Will this encourage you to take part in more Islamic Art?
Leave your feedback below inshaAllah!

If you would like to see a picture in more detail e-mail ihijabi@gmail.com and I’ll send you the big version.