Marwa El-Sherbini- The Effects of Islamaphobia

A wife, a mother, a daughter, OUR sister. 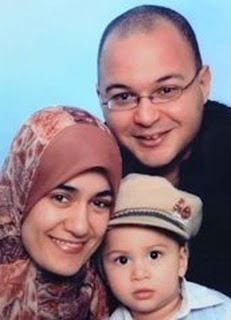 If I say the name Marwa El-Sherbini you probably wouldn't know who I'm talking about, its sad but its true many of you have never heard of Marwa El-Sherbini and probably don't know her story. InshaAllah after reading this you will wonder why you never heard about this and it will be a story that you pass on to your children and grandchildren...the story of a courageous young woman and her fight against Islamaphobia in modern day Germany.

Marwa El-Sherbini was an Egyptian born German resident. She was a pharmacist, a university lecturer and worked for a research company in Germany. With others she founded a registered voluntary association with the aim of establishing an Islamic cultural and education centre in Dresden (Germany).

On 21 August 2008 Marwa took her son to play at a local playground where she came into contact with her killer Alex Weins. her son and Weins' niece were playing together when an argument broke out over a playground swing. Weins started to shout racist and Islamaphobic abuse at Marwa just because she was a Muslim and wore a headscarf. (In front of the children) Wiens called her an 'islamist' and a 'terrorist'. Bystanders tried to intervene and Marwa called the police from a bystanders phone.

Wiens was charged with defamation and given a penalty order to pay a fine of €330. After formally objecting and refusing to pay the fine, Wiens was trialled at the district court of Dresden. He was found guilty by the court and fined €780 in November 2008. However, during the trial Wiens tried to claim mitigating circumstances for the act of insulting El-Sherbini, suggesting that "people like her" were not really human beings and therefore incapable of being insulted.The public prosecutor appealed the verdict, aiming at a custodial sentence due to the openly xenophobic character of the incident. Wiens also appealed the verdict and was subsequently granted a court-appointed defence counsel. His counsel intended to withdraw the appeal before the scheduled hearing at the regional court, but Wiens objected to this.

At the appeal hearing at the regional court in Dresden, 1 July 2009, nine people were present in the courtroom: three judges, the prosecutor, Wiens as the defendant, his court-appointed defence counsel, El-Sherbini as witness for the prosecution, and her husband and son as observers. No security personnel were present and no security searches of individuals and their possessions were carried out; this was a common procedure for cases without anticipated security concerns or detained persons present.
During the trial, the defendant Wiens appeared reserved but was noted for extreme statements. He said that Muslims were monsters to him and asked the court why they were not deported after the 9-11-attacks. He stated that German people should not mingle with foreigners and declared that he would vote for the far right National Democratic Party of Germany. The judge then requested a verbatim record, while the defence counsel tried to mediate. Wiens continued in this fashion, prompting the judge to ask whether he had ever visited a concentration camp. 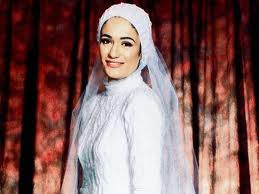 When she, her husband, and their three-year-old son were at the door, Wiens suddenly attacked El-Sherbini with a kitchen knife with 18 cm (7 in) long blade, which he apparently had taken into the courtroom in a backpack.

El-Sherbini received more than 15 stab wounds to the upper body and arm, the attack was carried out in such a forceful and sudden manner that it resulted in a notable absence of defence wounds. While trying to protect his wife, El-Sherbini's husband Okaz was stabbed at least 16 times to the head, neck, upper body and arm. Wiens's defence counsel tried to help El-Sherbini by obstructing Wiens with chairs and a table. The victim's three-year-old son was injured while being ushered to safety. The attack happened at 10:23, time-stamped by the judge having raised a security alarm. A police officer who was in the court building testifying in an unrelated case, was called to the scene by the commotion; however he mistook Okaz for the attacker and shot him in the lower leg. Wiens was apprehended on the spot, after one of the judges pointed out that not Okaz but Wiens was the assailant; while under arrest Wiens begged the police officers to shoot him dead. Okaz, critically wounded in the stabbing attack, was in a coma for two days. He was subsequently treated for several weeks in a hospital near Dresden for the stabbing and shooting injuries. El-Sherbini died in the court building at 11:07, succumbing to her injuries. Marwa El-Sherbini was 3 months pregnant with her second child at the time of the attack.

Another life lost to the horror of 'Islamaphobia'.

To Him we belong and to Him we shall return.

I pray that sister Marwa El-Sherbini is granted a place in Jannat-ul-Firdous, and her story is re told through the generations to remind the Muslim Ummah of the atrocities Muslims around the world are facing. Ameen.