The True Face of Feminism 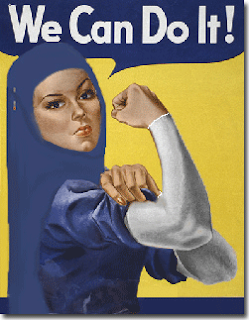 Throughout our lives we learn a lot about feminism and how much feminists have done for us women. In history we learn about the suffragettes in the late-19th to early-20th century and how they worked to bring us equal rights and the right to vote. Many people have a misconception that Islam is a very patriarchal religion, where men have the upper hand; it is also a misconception that women in Islam are oppressed because they do not think or live in the same way many women in the western world do. In this article I hope to clear some of those misconceptions by finding out what Islam says about women and their rights in Islam. I will also explore the ideology of modern feminism and why to me, it makes no sense.

In A level psychology we studied moral development, how does a person develop morals? What are the levels of morality? This was done through learning about various psychologists like Piaget, Kohlberg and feminists like Gilligan. In Kohlberg’s study participants were given a moral dilemma ‘the Heinz dilemma.’ From the responses his participants gave, he drew up 6 stages of morality. [Cavanaugh, J & Kail, R(2004) Human development :a Lifespan View, (3rd ed.) Wadsworth press Pg 321]

Gilligan’s argument was that the study was only carried out on male participants and that Kohlberg’s study was very andocentric, therefore, it is wrong to generalise the findings from that study to all people including women. Gilligan carried out her own study on women. From her study she concluded that women are more care orientated, whereas, men are more justice orientated. Other feminists criticised Gilligan’s findings and conclusions saying she is just confirming the ‘ good woman’ stereotype [Bartky, Sandra Lee: Femininity and Domination, page 104-5. Routledge, New York, 1990.]


It is very obvious that men and women are different biologically, physically and possibly psychologically. Why have you never seen men vs. women in football or a male athlete competing against a female athlete? It’s because men are physically stronger than women right? Then why is it so hard to understand the reasoning behind Islam telling a man that it is his responsibility to go out to work to provide for his wife and family?

“Men are the protectors and maintainers of women, because Allah has given the one more (strength) than the other, and because they support them from their means.” (Qur’an 4: 34)

Women in Islam are not oppressed because some choose to not go out to work, or some men do not want their wives to go out to work, they choose this lifestyle because it is not their responsibility to provide for themselves, in fact it is their husbands.

However, even though it is a man’s responsibility to provide for his wife it does not mean the wife cannot work if she chooses to do so. It is well known that Khadija RA, first wife of the prophet was a wealthy and very successful business woman and the prophet pbuh worked for her. This shows that Islam does not prohibit a woman to work so long as her job does not contradict Islam, this is a fact that many people in the west do not know about.

In Islam men and women are spiritually equal. The reward for a good deed carried out by a man is equal to that of a woman. Men and women are both obliged to pray fast and go for Hajj. Women have the duty to be educated in Islam in the same way as men. All in all in the eyes of Allaah men and women are the same.

Before Islam, women were treated like cattle or objects that belong to man, they were not allowed to buy, sell and own property. If a woman became a widow after her husband’s death she was not allowed to wash or wear new clothes and was made to stay inside the house until the birds and animals died from her smell. Baby girls were buried alive and the woman had no rights. Islam came and forbade the burial of baby girls; instead it taught that daughters were a blessing. Islam gave women rights to buy, sell and own property as well as inherit.  Mothers were given three times the right over a child than the father and the people were taught that paradise lies beneath the mothers feet.

In the Hindu culture when a woman becomes a widow she cannot wear anything that is not white and is not allowed to live a normal happy life, she cannot remarry and is shunned by not just the society around her but even her own family.

The French held a conference in 586 CE to discuss whether women had souls or not, and if they had souls, were these souls animal or human? In the end, they decided that they were human! But they were created to serve men only.

During the time of Henry VIII, the English Parliament issued a decree forbidding women to read the New Testament because they were regarded as impure.

Until 1805, English law allowed a man to sell his wife, and set a wife’s price at six pennies.
[http://www.islam-qa.com]

In the UK women only recently fought endlessly to have the right to vote, to have the right to have their own property and wealth because before then when a woman got married everything belonged to her husband or had to be shared with her husband. When Islam came to the world through the prophet Muhammad pbuh the ill treatment of women was addressed, women were allowed to vote and had right to their own property and wealth. In Islam a woman’s possessions are her own and her husband has no claim on what is hers, however, a woman has right to a proportion of her husband’s wealth and property as he is the one that has to provide for her. As a husband once told his wife “what’s yours is yours, and what’s mine is yours as well”


"And in no wise covet those things in which Allah hath bestowed His gifts more freely on some of you than on others; to men is allotted what they earn, and to women, what they earn; but ask Allah of His bounty, for Allah hath full knowledge of all things." (Quran 4:32)

If anything Muslim men should be the ones protesting because their wives seem to be getting the better end of the deal.

Oppression is stopping someone doing something that is natural to them. It is obvious that women are most fertile in their early 20’s and as they get older they become less fertile, this shows that it is natural for a woman to start a family quite young. Nowadays women who are successful in business and are very career minded see themselves as feminists many are put off getting married and having children so that they can focus on their career and get further in life academically and financially, but this is what I would call oppression because stopping a woman from doing what is natural to her by teaching her to be a career woman, never get married or have any children, dress like a man and behave like a man is not very feminine at all.

So if you’re a 'feminist' and you want to know what feminism really is then deepen your search for the truth in Islam because Islam gave more rights to a woman before all these feminist movements
at August 14, 2010

Email ThisBlogThis!Share to TwitterShare to FacebookShare to Pinterest
Labels: spiritual